On Wednesday night I had the honour, and pleasure, of attending the National Teaching Fellowship Awards Scheme dinner as I received a National Teaching Award this year from the Higher Education Academy and have now become a National Teaching Fellow.  The ceremony and dinner was held at Middle Temple Hall in London which was a very plush and ceremonial location.  Yes the dining hall might have looked a bit Hogwarts-esque but I think the idea was that that kind of grandeur befitted such a ceremony. 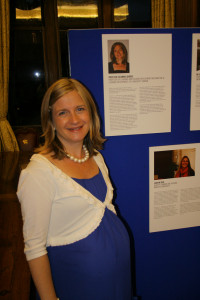 Despite my qualms about the event – most of which stemmed from my concerns about what on earth I was going to wear given that I would be 7 months pregnant or looking like 10 months pregnant due to the fact I’m carrying twins and whether I would be able to roll or waddle up to collect my certificate – I really enjoyed the evening.  The whole event was designed to make the 55 successful fellows feel special and honoured and I think it achieved that.  We were told that there are around 477  National Teaching Fellows whereas there are 180000 academics in the UK. We all know that teaching recognition can get a pretty raw deal in UK universities and it was great to feel appreciated and respected at a high level.  Many of the great and the good from UK HE were invited including our own VCs, people from HEFCE and HEFCW, president of the NUS etc etc.

The way that the Awards dinner was run and the use such surroundings, which required black tie dress, did make me think about how we honour teaching success at my own University.  We have dispensed with formal dinners instead incorporating awards into our conference and making the occasion a celebration, albeit an informal one.  I wondered, though, after Wednesday, whether we should be doing more to celebrate our winners every year – ok perhaps not on the scale of the NTFS dinner, I think Middle Temple would be out of our league – but perhaps dinner with the VC and President of the Students Union (our awards are led by the SU) would be a suitable recognition.  What was also a really good touch was to enable you to invite your partner or a guest.  There was acknowledgement that often those nearest you don’t always understand or appreciate what you are doing day-to-day and it was pretty impressive for them to see their other half celebrated in such surroundings.  Perhaps this is something else we could do at City.

We’re often too shy to recognise our achievements or not see them as worthy of note or celebration.  However, particularly in relation to learning and teaching, we should be shouting about what we do, as we can make a difference.  Although part of me feels that my award is not entirely down to me – I could not have achieved what I have without colleagues at City and beyond – and also incredibly shy on many levels about shouting about it and a bit uncomfortable with the idea of being “special”, Wednesday night made me realise how valuable these achievements are and what a difference they could make to the profile of learning and teaching within our own institution.  So my award is more than about me, I hope that I can use it to inspire and support others to celebrate their own worth and continue to make a difference to student learning.